The Art of Flight at Casa Farellones

After the worldwide acclaimed success of the back country extreme snow board movie, “That’s It, That’s All” in 2008, Travis Rice and the Brain Farm production team were soon working on a new movie, later to be known as “The Art of Flight” .

In search of more exotic locations, Chile was a natural new destination!!

Casa Farellones was pleased to host the stars, the director and the production team for three weeks in the summer (southern winter) of 2010.

As those of you have seen the movie (which was released late in 2011, and then as a TV series early in 2013 ) will know ,  2010 was a bad winter for snow in Chile. That however did not prevent the crew from recording some wonderful shots of the mountains, cities and beaches of Chile, several in house scenes and interviews shot within Casa Farellones, and eventually terminating, in their quest for snow, in a dramatic couloir in deepest Patagonia. (Check the links on the right  for preview’s and download sites for the movie, which should not be missed). While clearly frustrated, by lack of snow for spectacular extreme skiing shots, that did not stop the crew enjoying their stay at Casa Farellones –  some of their comments were posted to their Facebook

“While we were unlucky with snow during our visit to Chile, Casa Farellones proved to be a phenomenal base for our filming and heli operations. Phenomenal Lodge, Phenomenal terrain, Phenomenal country – really hoping to get the chance to come back again in a good snow year” Brain Farm – 7 September 2010

Come and stay at Casa Farellones and enjoy the same accommodation as used by Travis Rice,  Mark Landvik, Scotty Lago, Jake Blauvelt and the crew when they were making “The Art of Flight”! 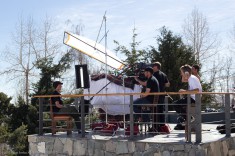